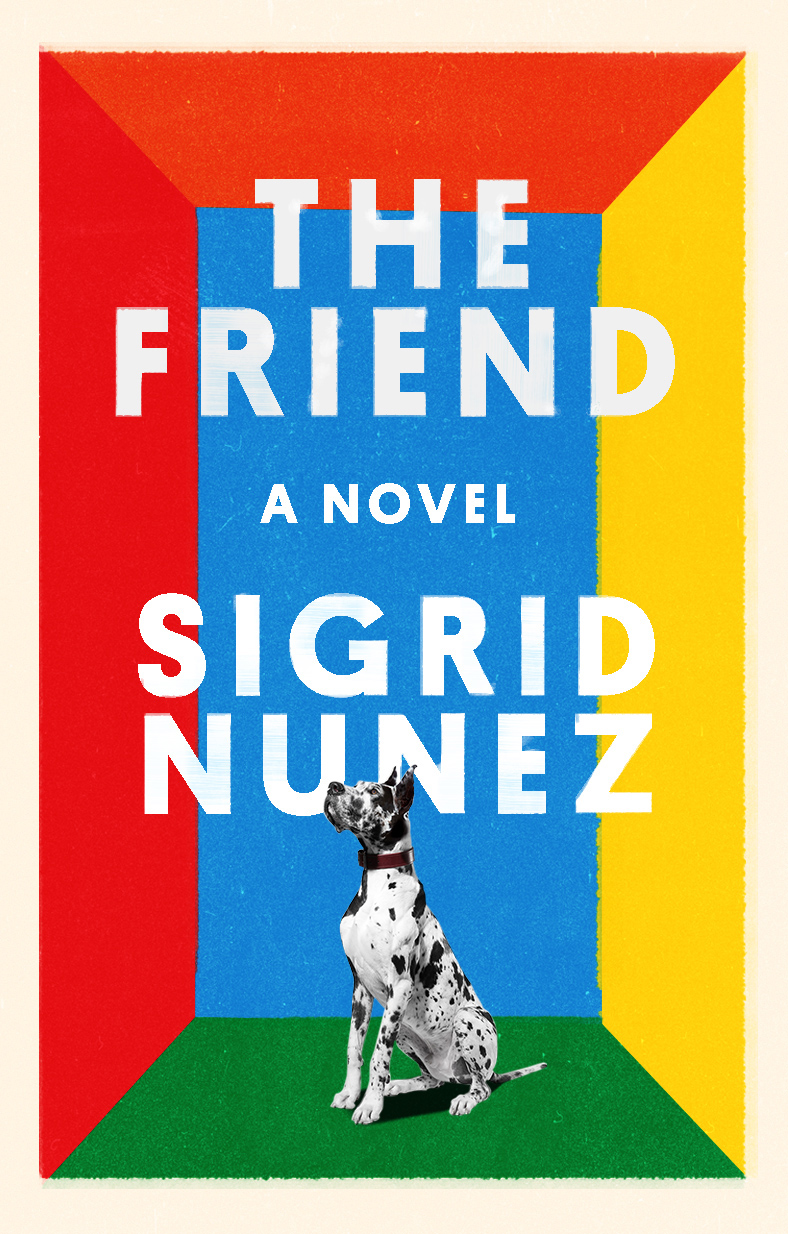 When a woman unexpectedly loses her lifelong best friend and mentor, she finds herself burdened with the unwanted dog he has left behind. Her own battle against grief is intensified by the mute suffering of the dog, a huge Great Dane traumatized by the inexplicable disappearance of its master, and by the threat of eviction: dogs are prohibited in her apartment building.

While others worry that grief has made her a victim of magical thinking, the woman refuses to be separated from the dog except for brief periods of time. Isolated from the rest of the world, increasingly obsessed with the dog’s care, determined to read its mind and fathom its heart, she comes dangerously close to unraveling. But while troubles abound, rich and surprising rewards lie in store for both of them.

Elegiac and searching, The Friend is both a meditation on loss and a celebration of human-canine devotion.

Named by The New York Times as a 2018 Literary Event not to be missed and a Most Anticipated Title of 2018 by TimeOut, BuzzFeed, BookRiot, The Millions, Bustle, Vulture, Harper’s Bazaar, PopSugar, Shondaland, Paste Magazine, The Huffington Post, The Rumpus, Electric Literature, Chicago Reader, Bookhub, The Hippo: New Hampshire’s Weekly, Fast Company, Garden and Gun.

Praise for The Friend

“Dry, allusive and charming…. This novel’s tone in general, however, is mournful and resonant. It sheds rosin, like the bow of a cello…. [It] is thick with quotations and anecdotes from the lives and work of many writers, in a way that can recall the bird’s-nest-made-of-citations novels of David Markson. Nunez deals these out deftly; they do not jam her flow. The snap of her sentences sometimes put me in mind of Rachel Cusk.” — The New York Times (Read the full Times review.)

“In crystalline prose, Nunez creates an impressively controlled portrait of the ‘exhaustion of mourning.’ ” — The New Yorker

“A beautiful book … crammed with a world of insight into death, grief, art, and love.” — Wall Street Journal

“With enormous heart and eloquence, Nunez explores cerebral responses to loss — processed through the writer’s life — while also homing in on the physical burden felt by those left behind….‘The Friend’ exposes an extraordinary reserve of strength waiting to be found in storytelling and unexpected companionship.” — Minneapolis Star-Tribune

“The writing is beautifully spare and controlled…. The Friend is a delicious read, but also a wrenching one.” — The New York Review of Books

“The Friend … marks a departure for the author, whose past work has trodden territory such as class, friendship, and sexuality, often with a historical bent. The Friend covers equally meaningful ground but does so on four paws. [S]lim but pitch-perfect…. Wry and moving, The Friend is a love story, a mania story, and a recovery story. So: a love story.” — Vanity Fair

“Nunez’s gift to her narrator, to the narrator’s massive companion, and to the reader, is not to banish loss or pretend it can ever be banished, but to take in the warmth of the sun, the lap and sparkle of the water, to allow us the time and space to breathe with the realization that these treasures still exist, even in the face of death. The Friend is one of those rare novels that, in the end, makes your heart beat slower.” — The Los Angeles Review of Books

“[A]fter I’d turned the last page of the book I found myself sorry to be leaving the company of a feeling intelligence that had delighted me and even, on occasion, given me joy…. If the writing in a book is such that it moves the heart, stimulates the intellect, and enlivens the spirit, we can conclude that it is a work of literature—period—and as such is entitled to make its own laws. On that note I leave The Friend to go out into the world of the common reader, where it is sure to connect swiftly with its natural soul mates, of whom I am certain there will be many.” — Bookforum

“[A] wholly original novel…. What makes the book work is the way The Friend reflects on loss, life, and creativity in such a straightforward and bold way…. The Friend is proof that what we lack is itself a vital part of life — and that loss can lead to meaningful connections found in unlikely places. Sometimes it can take an animal to make a person understand their own humanity. And sometimes a book as unexpected as The Friend can provide as much comfort as any canine companion.” — barnesandnoblereview.com

“It’s a really beautiful story… [at the end] your heart aches in a good way. You heal with [the narrator] and the writing is so good.”— Buzzfeed, ‘AM to DM’

“A brilliant work of fiction about the writing, reading, and literature of grief… This intense, ingenious tale unfolds inside the narrator’s scattered, literary head, and evolves as she becomes obsessed with Apollo’s care while they connect in their grief—and the huge hound proves worthy of his name.” — National Book Review

“Quietly brilliant and darkly funny…. so elegant—so dismissive of conventional notions of plot—it hardly feels like fiction. Breathtaking both in pain and in beauty; a singular book.” — Kirkus Reviews  (starred)

“This meditative, beautifully written novel reads as intimately as a memoir…. Ultimately, The Friend ponders the meanings of loyalty, love, friendship, and a buoyant creative spirit.” — Shelf Awareness

“[A] poignant reflection on loss and companionship.” — Marie Claire

“Nunez’s story of a dog and his inadvertent caregiver is a darkly humorous and unsentimental tale of friendship, mourning, and solace.” — Electric Lit

“Rivetting … This elegant novel explores both rich memories and day-to-day mundanity, reflecting the way that, especially in grief, the past is often more vibrant than the present.” — Publishers Weekly

Read the profile of Sigrid in Publishers Weekly.

“The Friend is the newest, and one of the most impressive, additions to a growing canon of reality-hungry books…. Like other books before it, The Friend feels like an artful reconstruction of real events, and thoughts and feelings, from its author’s life…. Nunez’s prose, and the prose of the writers and artists she quotes from, is delightfully aphoristic—turn to any page and you will find a sentence worth reading out loud to a friend or co-worker. Elegiac but funny, with a narrator who’s smart and approachable, The Friend is a book I savored, and will happily revisit in the future.” — John Francisconi, Bank Square Books

“The intensity and elegance of The Friend mean two things: you cannot put it down and you will cry. In a novel about loss and the loneliness of writing and imagination, Sigrid Nunez creates an irresistible tale of love and an unforgettable Great Dane. A beautiful, beautiful book — the most original canine love story since My Dog Tulip.” — Cathleen Schine, bestselling author of They May Not Mean To, But They Do

“The contemplation of writing and the loss of integrity in our literary life form the heart of the novel…. The Friend could almost carry a trigger warning for writers, teachers and readers, except Nunez’s prose itself comforts us. Her confident and direct style uplifts—the music in her sentences, her deep and varied intelligence. She addresses important ideas unpretentiously and offers wisdom for any aspiring writer who, as the narrator fears, may never know … this world that is dying. But is it dying? Perhaps. But with The Friend, Nunez provides evidence that, for now, it survives.” — The New York Times Book Review

“The Friend, Sigrid Nunez’s sneaky gut punch of a novel, is a consummate example of the human-animal tale…. [It]’s tone is dry, clear, direct—which is the surest way to carry off this sort of close-up study of anguish and attachment.” — Harper’s

“[The Friend] is an intimate, beautiful thing … humming with insight…. [A]n artfully discursive meditation on friendship, love, death, solitude, canine companionship and the life of an aging writer in New York…. Like a magpie, Nunez’s heroine plucks wisdom from writers, philosophers and films to weave a story about the search for meaning in dark times.” — 1843 / The Economist

“Brilliant … sad yet laugh-out-loud funny, The Friend is a digressive bumblebee of a novel that alights on aging, death, the waning power of literature and the strength of friendship…. [T]his beautiful, spare work will not disappoint.” — BookPage

“[A] penetrating, moving meditation on loss, comfort, memory, what it means to be a writer today, and various forms of love and friendship—including between people and their pets. All in a taut 200 pages…. [T]his nuanced, exceptionally literary novel about devotion is a natural outgrowth of Sempre Susan…. Nunez has a wry, withering wit.” — NPR Books

“Challenging, elegant, and expansive, The Friend delivers a stunning portrayal of grief, joy, and friendship that is completely unique.”—The East Bay Review

“Nunez’s seventh novel — and her first book since Sempre Susan, about Susan Sontag — displays the intellectual heft of her late friend’s work, but also a distinctive sense of humor and narrative momentum.” — Vulture

“[Nunez’s] work is so lovely, so captivating. The Friend is a perfect example of her fluidity with words, her talent for captivating the reader, and her enviable ability to distill the complexity of human existence into simple prose…. Put down the book after finishing a short, page-long piece and you will have enough to think about for the rest of the day. How many books inspire the same? — BookBrowse

“The Friend is witty, wry, more than a little sad, and occasionally profound. The book is a complete surprise: an unexpected volume that is fun to read, about people you can imagine meeting and mourning when they’re gone. To say nothing of the dog….” — The Washington Free Beacon

“An elegant and darkly humorous meditation on grief and companionship … a great read—whether or not you’re obsessed with canines.” — Shondaland.com

“A wry riff on Rilke’s idea of love as two solitudes that ‘protect and border and greet each other.’” — Vogue

“An elegant, moving, thoughtful meditation on grief, friendship, healing, and the bonds between humans and dogs.” — BuzzFeed

“Nunez offers an often-hilarious, always-penetrating look at writing, grief, and the companionship of dogs.” — Booklist

“A masterful celebration of our relationship with dogs, The Friend is also an unforgettable, uniquely told story about that relationship’s redemptive and healing powers. [A]n elegant, erudite and fully charming, life-affirming book.” — The Bark

“Nunez’s writing is haunting and poignant…. [I]t is, in one word, unforgettable.” — Travel + Leisure