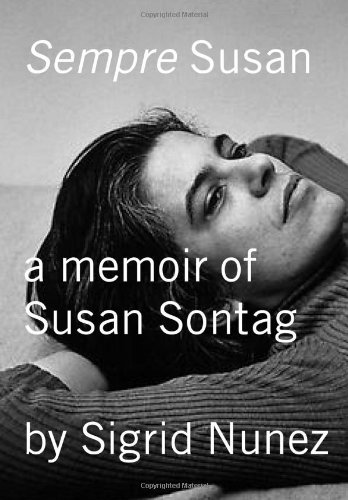 “[T]he masterpiece of the ‘I knew Susan’ minigenre and a funhouse-mirror companion to Sontag’s own ‘Pilgrimage.'” A.O. Scott

Susan Sontag was forty-three years old and already a major American writer and thinker when Sigrid Nunez first met her, in 1976. While recovering from cancer surgery, Sontag hired Nunez, who had recently finished graduate school, to type her correspondence. She introduced Nunez to her son, and the two began dating. At the time, mother and son shared an apartment on Manhattan’s Upper West Side, which soon became Nunez’s home as well. Described by Nunez as “a natural mentor,” who considered educating others both a moral obligation and a source of endless pleasure, Sontag inevitably infected those around her with her many cultural and intellectual passions. Her influence on Nunez would be profound, and Nunez looks back with gratitude for, among other things, having had, as an early model, “someone who held such an exalted, unironic view of the writer’s vocation.”

An intimate portrait of one of America’s most esteemed cultural figures, during a time when her life was both at a peak of success and unusually turbulent, this work of memory is also a deeply felt work of homage. For a young woman who yearned to become a writer, Nunez tells us, meeting Susan Sontag was “one of the luckiest strokes of my life.”

Listen to Sigrid on American Public Media’s THE DINNER PARTY

Read a Conversation with Sigrid Nunez about Sempre Susan

Regarding Sontag at The Center for Fiction

“Sigrid Nunez’s intimate portrayal of Susan Sontag will fascinate both ardent Sontag fans and those who have never read her work. This memoir is at once a window into the writing life in general, an examination of the complexities of one artist in particular, and a tribute to the lost intellectual New York City of the 1970s. Remarkably, it’s as honest as it is affectionate and as sad as it is charming.” — Curtis Sittenfeld

“Sempre Susan is as epigrammatic, funny, and brutal as its subject. Sontag fans, haters, and agnostics alike will find that it contains indispensable lessons, both explicit and subtle, about how and how not to write, and how and how not to live.” — Emily Gould

“A skilled writer, Nunez brings an up-close perspective to this revealing yet compassionate memoir.” — Library Journal

“Nunez, an uncompromising talent in her own right, offers the most vibrant and multifaceted portrait of Sontag to date.” — Vogue

“[A] fair and openhearted portrait…. Nunez has constructed a eulogy that mythologizes and humanizes one of the most intimidating figures of contemporary culture.” — The Boston Globe

“Nunez, now a fine novelist, has written a clear-eyed tribute…. With an eye for the telling detail, this intimate and occasionally raw portrait makes it plain that despite all Sontag’s public renown, much of her was entirely mysterious.” — The Economist

“A loving memoir, full of arresting details and an occasional spirited defense of her mentor…. Sontag [once] remarked that all her work says ‘be serious, be passionate, wake up.’ Clearly someone was listening.” — The Los Angeles Times

“[A] sidelong portrait by Sontag’s son’s girlfriend — a young devotee coming, Icarus-like, too near a blazing mentor.” — Recommended Summer Reading by Richard Brookhiser in National Review

“Just as Sigrid Nunez is clearly grateful to Susan Sontag, so readers should be thankful to Nunez for this nuanced and intimate book-length portrait.” – Louisville Courier-Journal

“This detailed, nuanced account of the more private side of a complex, contradictory public figure is told with even-handed good humor and more than a little compassion. Utterly absorbing.” — Lydia Davis

“Sempre Susan is written with quiet authority, flashes of poetry, and a steady accumulation of startling, precise details, some apocryphal (Sontag didn’t know what a dragonfly was? drank blood as a child?), until by the end Sontag the Myth comes to life. What is amazing about this wonderful book is that by the end we know as much about Nunez as we do about Sontag, by the very focus of her attention, by her perception of the myth, by her compassionate interpretation.” — Nick Flynn

“Sigrid Nunez’s Sempre Susan doesn’t just evoke Susan Sontag, the person, with hard-won sympathy, insight, and cool; it contains (in a very tiny space) material for an entire novel of idealism and disillusionment. This Sontag—who ‘often struck me as someone who wanted to be feeling ten times what she actually felt’—is a tragic figure, and this memoir captures the spirit of the spirit of her times.” — Lorin Stein, The Paris Review, Staff Picks

“Ms. Nunez writes beautifully, [and] her memoir offers the most revealing portrait of Sontag yet.” —The New York Observer

“Susan Sontag roars to life …. As magnetic and complicated as Sontag herself, Nunez’s homage is both critical and compassionate … [an] elegantly crafted chronicle of a young writer’s artistic education.” — Vanity Fair

“[A] fresh and touching book…. [Nunez’s] genuine curiosity about her own experience—her memories of love and love lost, youth and youth lost—is the quality that gives this book an elegant, almost compulsive readability.” — The New York Review of Books

“An acclaimed novelist in her own right, Nunez manages to be neither falsely reverential of her erstwhile mentor nor dishily diminishing…. [T]his is also the story of Nunez coming of age and finding her own way as an artist … a story about how one female artist profoundly influenced another, not only by being “exemplary” but also by revealing herself as flawed and human.” — Slate: Double X Book of the Week

“Nunez’s slim, elegant memoir … presents something [Sontag] herself might have appreciated: a lament for not just a person but a lost era…. [B]eneath Nunez’s discreet girl-meets-boy story lies a revisionist, even radical, achievement: the most sympathetic portrait of Sontag to date. In considering Sontag through the story of her own coming of age as a writer—Nunez is now an accomplished novelist—she recasts a villain as a role model, hero, and muse.” — Tablet

“Once started, it’s impossible not to finish this memoir, which is … among the highest compliments which can be paid to a book.” — Creative Loafing Atlanta

“[T]he total absence of malice in this insider’s portrait of Sontag makes what it reveals infinitely more powerful…. [Nunez] was a young woman already blessed with a formidable independence of taste and thinking. [She is] a writer … genuine and original … (as anyone who has read her fiction will know).” — Washington Times

“[P]erhaps for the first time, a portrait of Sontag as a fully rounded human being emerges from the mire of beatification, deification and vilification that continues to surround her.” — Xtra! Canada’s Gay & Lesbian News